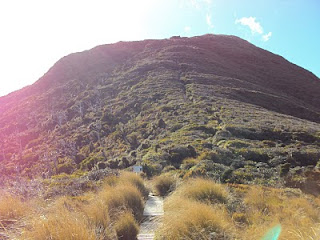 (I believed I'd sent this three weeks ago but apparently sent it to a non-functioning address. Sorry for the delay!)
I came back to New Zealand as a visitor for the first time. Loose plans became firm. The food I had been denied for so long was now in huge supply at Countdown. As with my previous return from a long stay in 2000, the same things dawned on me: New Zealand is a great place; the air truly is sweeter; and …. Another thing that struck me is that I still don't really have a best friend in China , someone to chat about the nitty-gritty of life with. The absences of my life in China were more apparent in New Zealand .

And New Zealand blessed me with a rather brilliant run of weather, sending areas into drought. I could tramp in ideal conditions, swim at the beach twice and drive without any meteorological oddities. Going back, there was a seamless transition between the weather in Auckland last Friday, Hong Kong on Saturday and Guangzhou , as if the weather gods had decided to smooth the way.

New Zealand had barely changed. As I walked up Mt Eden road the sight almost merged with the memory of walking there before I left. A few restaurants had changed hands; cafes renamed; but it would be a fairly difficult game to "Find ten differences". The biggest and most pleasant change was the roading. The Taupo bypass has been completed; the Hobsonville bypass is half-done; the work on the airport motorway seems nearly finished; and the diabolical Manukau on/off ramps are now in fiendish form, sending me off in wrong directions twice.

Guangzhou, likewise, had changed about the same amount in the month I had been away. My return to the People's Republic featured one of the more extraordinary aspects of China 's information control system and one of my more inadvertently stupid acts. On the way to New Zealand , I wanted to buy a certain book which is banned in the People's Republic but available in Hong Kong . I couldn't find it then but on the way back into China I spotted it in an airport bookstore, Page One, and seized it (for the not cheap price of HK$150, NZ$30). I read the first chapter in Hong Kong while waiting for the train and then put it in one of my three items of baggage. On the train I didn't touch it, reading other books. Once I had disembarked I went through customs and then had my bags scanned by one of those big machines I assumed could only pick up knives, guns, bombs and organic matter. They came out the other end but as I picked up my bags, an official gestured at me from behind a desk.. I went over and he grabbed the exact bag carrying the book and without hesitation grabbed the Page One bag which contained it. He pulled the book out and flicked through the pages. "Can you speak Chinese?" he asked. I answered in the affirmative. (In retrospect, this could be either a curious question for a foreigner carrying a Chinese book, or a more probing question intended to find who I was bringing it for.) He asked and looked at my passport. He just looked at me with an almost-grin and said: "You can't bring this book into China ." I clarified with him innocently and he shook his head. He gave back my passport to me before taking the book away to the side. I stood there for a moment and I waited for a moment thinking that he hadn't told me to go, but moments later with a slightly humored wave he sent me along to the next step.

I was quite unsettled and astonished but then technology must be serving the surveillance society well. There may have been something in the book (perhaps a requirement for China to the Hong Kong publishers) to make the book detectable; or perhaps it is even more high-tech and can sense the book cover; or perhaps every book has a detectable set of dimensions and any book matching any of several banned books would be pulled up. Either way, I was happy to just have the book confiscated and nothing more (I think). It boggles the mind and is a salutary warning: I'd carried a certain banned book around China on my first trip. It is not something that will be possible again.

And so I'm full circle, back to where I was a year ago, seizing an apartment in November for the year ahead. My objectives are so much more clearer and potential outcomes all the more tangible and in reach. It is certainly an interesting time to be me.

Posted by Crypticity at 2:15 pm No comments: