In April, I wrote about The Three Body Problem: Remembrance of Earth's Past, the first book of an award winning science-fiction trilogy written by Chinese author Liu Xinci. At that time I'd just blasted through the first book, and thought it pretty good. My pace was choked a little on the second book, mainly because I stopped taking the bus, which has always been a great source of reading time for me, and had upped my running, which also took valuable leisure time. The second book was in my view even better than the first. With a bit of wind behind me from the interest in the climax of the second, I cruised home in the longer third, which matches it for richness of ideas, finishing on 30 December. I'm glad I finished it before the new year. 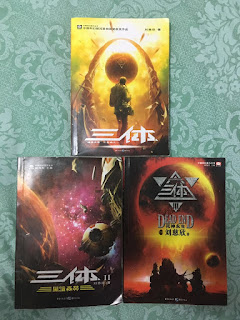 The first book, The Three Body Problem: Remembrance of Earth's Past, was the winner of the Hugo Award in 2015, one of the top awards of science fiction and the first for a Chinese author. It's a grand story set in the Chinese Cultural Revolution era and contemporary times (early 2000s); the second, Dark Forest, is set in the near future and two hundred years in the future and the final, Dead End, well, the scale is the future, the even more distant future and in a time without time.

The author knows his stuff: the science of the future is plausible and described in depth. There is no hiding the fact that space travel is time-consuming and you have the confidence that the author was always figuring out the maths of what he was describing, of speed, space and time. But the most astonishing thing for a reader is that it has very deep references from a wide range of fiction and non-fiction, from A Clockwork Orange, to Gulliver's Travels; from Superman and Christopher Reeve to Silent Spring; from the Bible to Hugo Chavez; from Space Odyssey to Asimov; from nanotechnology to the Sword of Damocles. In a book written by a Chinese writer for a Chinese audience. In the third book, it even has a character doing a rendition of the haka without appearing too out of place. The third book also has an intriguing prologue set during the Siege of Constantinople.

And it is profound, especially in the second and third books where the grander ideas arise and the scale of the imagery is even more breathtaking. Even in the first book, which I may have to re-read in awareness of the greater story, it brings one of the most glorious creations, the sophon, a smart "particle".  It is perhaps the ideas that won it the awards; as a reader, I was disappointed by the dialogues and some of the personal narratives and character development. But I'd still recommend it to everyone.

Now's time for another book - I'll burn through a couple of English books before heading back to Chinese fiction, either the heavy Big Breasts & Wide Hips by Mo Yan or the lighter, The Deer and the Cauldron by Louis Cha. It should be fun!

Posted by Crypticity at 11:58 am No comments: