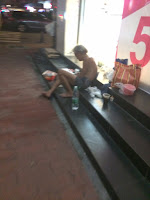 In an society where people doubt the authenticity of beggars, thinking they rake in millions and buy Mercedes, The Loner is beyond reproach. He's there every night, just in shorts, his curved back is painful to see and he often falls asleep on the curb, mouth open. He's authentic, alright. He used to have a piece of wood introducing himself as 孤人 saying he needs saving. He doesn't any more. He just chalks his wisdom of human nature on the pavement, sometimes after some analysis of a newspaper, and then falls asleep on the pavement, mostly unclad. When he walks, he has a clear hunchback. Often he puts his medication out on display as that is what he wants as much as money. 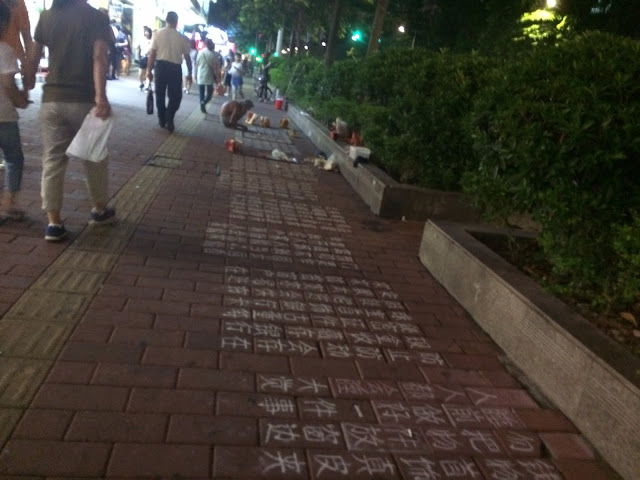 Guangzhou has many chalkers. They often have deformities and will crawl their way down the pavement writing some story, often rhyming, about their plight. I've always seen The Loner as above and beyond. He doesn't ask for help any more. There's a bag open. He does his thing. He lives on. He's Guangzhou's answer the late, great Blanket Man of Wellington. He's probably the most common recipient of my loose change. I don't think money will ever save him. It'll only ensure his comfort as he goes on. 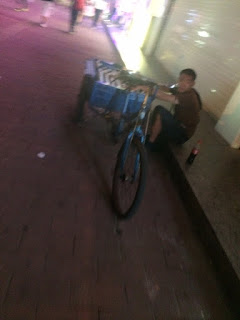 It took me a while to see the Water Boy but it seems like I've never stopped hearing him. We're above Jiangnan Xi, 26 floors up to be precise, and the most common sound is the rhythmic cry from below of the Water Boy selling his water. It was there every afternoon but I'd not seen or at least noticed him on my errands, but boy did his voice travel.
"Help me buy a bottle," he'd say in  a way that one knows there might be an extra chromosome, or perhaps just a defect of some sort. If you try to buy a bottle he'll often try to sell you the lot, usually a 100 bottles. He says he can't go home till he sells the box. Recently he has moved up to a bicycle cart that can carry more bottles.
"I'm hungry. Buy these water bottles."

One assumes the worse, perhaps a handler or a parent using his disability to make money. One could say that he isn't really a beggar because he really is vending a product, a girl guide at your door. I'll buy his bottles one day soon. 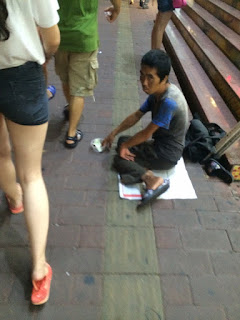 There he is again, always with his crutches there, one slipper cast aside. He often says something quickly and indistinctly at the coming people. He's the Cripple. I believe him to be authentic but he is the one person I don't give to. Perhaps all of the people are really in need of help but I don't take to people who don't respect others. His crime: He usually sits in pedestrian bottlenecks, a strategy to get noticed perhaps, but not one that gets my Renminbi. He also is pretty grim. He stares desolately.

There are others. I've bought calligraphy off an occasional visitor who writes with his mouth. He has no hands. There's Big Head Boy. He's always at the back of a cart. He must have some disability with his legs as well as his intellect. There's the Bearded Man in the wheel chair. His legs are shrivelled. There's the Fallen Woman, not because she actually fell but that's her pose no matter when or what day you walk by.

There are others too, both likely genuine and some quite dubious. It's a wild world and it's not a surprise that some people don't weather the changes. I write this in recognition of them. Not to forget them. To occasionally give to them. But to feel bad not to have helped them.
Posted by Crypticity at 4:03 am No comments:

Posted by Crypticity at 11:27 am No comments: 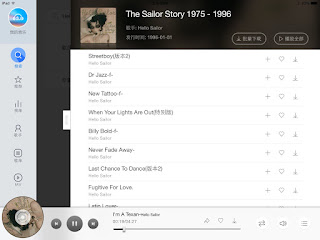 Posted by Crypticity at 10:08 am No comments: 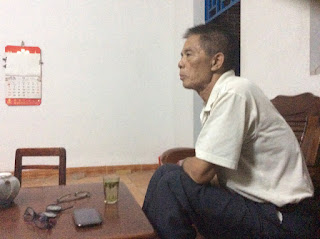 Posted by Crypticity at 1:27 am No comments: