On the Chinese calendar today is known as "the big heat" and as if human designations meant something to Mother Nature, today duly hit 36 degrees, easily the hottest day of the summer thus far. I did my longest run, 36 minutes, in 30 degree heat at 8:30am this morning. It's hot. Psychologically I have no trouble with being hot but my body is another story. I have rashes coming up itchily on all parts of my body; I sweat even in the cool; and I can't sleep at times. Air conditioned life is not easy either, yoyo-ing between hot and cold might be half the problem.


The news that another distant friend died reached me today. He is and was Tetsuya Umehara, a student I met possibly in Chinese class although may have also been some management class at university before I went to Taiwan. He was from a rich Japanese family, lived in a big expensive apartment on Nelson Street in the CBD. He was extremely intelligent but not given to much in the way of moral introspection. One frequent topic of discussion behind his back was how he treated his two off-and-on-again girlfriends, Yuki and Jessica. They were both good natured girls, both beautiful and both woefully treated. Please excuse me speaking ill of the dead. I remember having some distaste for his treatment of a mutual Japanese friend who he socially ostracised in a kind of Japanese group action against an individual, something I didn't understand.

But he was a good friend. He was easy with other people. I remember how a friend and I noticed his penchant for having tissue boxes in his car and called him Tissue-ah. After he quickly learned Chinese curse words, Chinese friends asked him to swear in Japanese, upon which they said it sounded like a dog barking. We all laughed. He didn't care. He would keep talking regardless. In Taiwan I got an e-mail from him. He was coming! He called me out and we ate; we went to a hot spring in Wulai, probably the best spa experience of my life. I was floating after it. And it became the hot spring experience I cruelly measure all others to.

He died almost a week ago. His Facebook profile (albeit edited) says: "Good night everyone!" in Japanese on the day that he is said to have died. People don't tend to focus on the causes of deaths. This was either a sudden health condition or his own hand. It doesn't matter.

Death was nice as a theoretical construct to think philosophically about, but as we age it's something that we need to adjust to emotionally and spiritually. I finished a novel, Norwegian Wood, just last week. It's written by Haruki Murakami, probably the most well known Japanese writer. There's plenty of death in it. In the heat, I can only ponder momentarily about the juxtaposition of real and fictional extinction.
Posted by Crypticity at 3:40 am No comments:

In the last blog I attempted to re-imagine the ideal Chinese style beach holiday, taking what was a generally western concept and re-orienting it more to the East. There are lots of aspects of current Chinese culture that are more or less borrowed wholesale from the West without much adulteration. Clothing is one aspect – traditional clothing is only for very special occasions and many wouldn't go near it if they didn't have to. As a result, clothing habits are pretty much in line with what the rest of the world wears.
Gyms are also something more European than Asian. Traditionally health was maintained by martial arts and medical theory. These days martial arts and qigong are neglected by all except that aged; plaza dancing is hugely popular right now among middle-aged women; and a small portion of the youth rely on sports such as badminton, table tennis and football to remain fit and active. As for the others, some are chronically unfit. For the youth, the demands of the education system make it difficult to maintain fitness.
Gyms have come to China since the reforms and there is the same kind of muscle-obsessed people supporting them, just like in western countries. I used to go to a well-equipped modern gym a couple of years ago. The customers were almost all young or international; the atmosphere was the same as in a gym back home. But after breaking my knee though, I decided to go to a smaller nearer local gym and was really surprised at what I found: a Chinese style gym. Unfortunately the things that make it more Chinese are the things that make it less desireable.
Let me describe it before I get to the people: Firstly, it is not in a sealed room. It is open to the outside air. This could actually work in New Zealand – it's cooler – but in Guangzhou at 10am, when I usually go, it's already 30 degrees. (It was a quite a shock having just returned from Bali where I'd just managed to run 20 continuous minutes in an air conditioned gym to not even make 8 minutes before feeling my heart was about to explode.) It also has its own overpopulated 20 metre pool. The equipment is time-worn and regularly out of order.
The staff have the normal low paid service attitude; that is, they sometimes don't notice you standing in front of them waiting for their attention. They sometimes get caught in their own topics of conversation and miss opportunities to serve. There are regular loud verbal altercations between patrons and the staff which they make no effort to hide, especially at the front desk that often becomes akin to a fort.
But let's focus a little on the people because modern gyms and small gyms split people culturally. Modern gyms get the people who adopted the culture of the west. Small gyms capture older people who will make the gym in their own image. Retired people here are naturally gregarious and treat the gym as a social thing, not completely focussed on health. So around the pool you'll find a table of guys, all in black togs, smoking after their morning swims and work-outs. There are no "no smoking" signs.
The gym does have some signs, though. One of them says: "Work out in a civilised way; Keep your body covered". This is ignored by about half the male patrons who go to the gym for the purpose of showing off their upper body. (This echoes another interesting summer habit that I call the "paunch show", where guys in the older districts will roll up the bottoms of their t-shirts to reveal their bellies, ostensibly to keep cooler.)
Another interesting thing is the occupation of machines. People will take machines not for use but as their own place which incidentally also denies other people's use of them. Someone might do some exercise on a machine, then sit on the machine for five to ten minutes to rest, before continuing a little more, then resting for a few minutes. I've seen people eating while sitting on some of the most popular machines. My favourite machine is the treadmill and sometimes people half-way through a run will leave all their possessions on a machine, with the machine running, and go to the bathroom for a few minutes and then come back to use it, while people are still waiting to use one.
Despite the above, I'll continue to use it. Having one so close has meant that I've been to the gym three to four times a week for the last month or so. And my body has adjusted to working out under heat. I've completed 30 minute runs on two occasions in near 30 degree heat. I'll look to keep this up for another month or two and then maybe do proper running in the park or around Guangzhou on a quiet morning or evening.
Posted by Crypticity at 12:27 pm No comments: 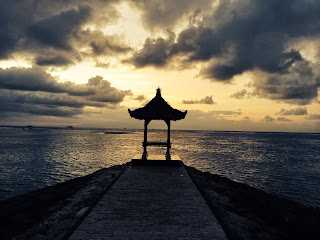 Posted by Crypticity at 1:16 pm No comments: