Like a lot of people, I've been enjoying the Trump Presidency, if only for the joy of outrage and seeing people apoplectic at apparent brazen ignorance. A colleague of mine said that his election would be a goldmine for the comedians, but I contend that it is a self-mockery that cannot really be beaten. "You cannot write stuff like that!". You'll never meet a better mockery of Trump than himself. The only satire I'd laugh at would be to have him making sense and playing it straight. Have a comedian answer the question with a cogent answer.

As we have this kind of personality pushing the envelope of reality, it really does make me think about how beliefs and narratives work for people. Clearly some people are listening to his words and making sense of it all, which might strike his detractors as impossible.

If there is anything that is true though, it is that a story matters, and we all have stories about ourselves and the worlds. We, after all, "aren't that kind of person" except for that time when you weren't. And it's the "story of my life" and we successfully fulfill our own prophecies both good and bad. I sigh a little when my family and colleagues say they are a particular kind of person or identify themselves as an agent in a recurring narrative. We do though seem to make a narrative of our lives as narratives make sense of otherwise meaningless events and actions. Our world too needs a narrative, and if there is a singularly big achievement that distinguishes Trump from other candidates it was that he wasn't just about what he was (which admittedly he did hammer on about). He created talked about a bigger narrative that more people found matching their own. Obama, being the speaker that he was, did something similar in a far more well-spoken way. "Fake news" may be an unsophisticated catch-cry but it does chime with the suspicions of many.

The narrative doesn't have to be reality; in fact, by definition it's not. It should be in line with their aspirations or their fears. If want to lead my team well, I really need to project that my school is a body generally pulling in the right direction, that teaching is fun and changing lives, and that the job of teacher is special one. All or most of these could be wrong. The real situation must be textured, fractal and complex.

Narratives do have a rubber-meets-the-road element at some stage; ragged reality is bound to intrude at some stage. Apocalyptic cults meet that with the passing of their last day, after all. Invincible youths meet a sharp corner. And "winning" Trump has had moments where he met defeat. It's only cognitive dissonance or willful ignorance that makes him see his administration as a "smoothly running machine".

But narratives do shape the road because the road is partly paved by the humans who are participants from in some way. I think about this when watching cricket - the best chasers in cricket are not necessarily the most skillful but the ones who make the other team stop believing in their own winning narrative. When the bowler knows he cannot be the hero, that the ball will almost certainly go into the crowd, he's lost the game for his team. Sports games have their own narrative viewers give to them as well as what the players create, and the cheers or otherwise of the crowd may sway the players as well.

I remember hearing the theory that consciousness itself is a narrative. I like it. It fits my story perfectly.
Posted by Crypticity at 9:21 pm No comments: 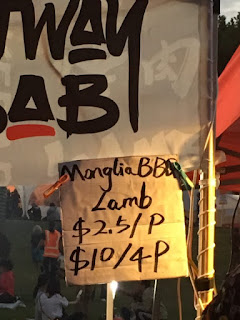 Look at this picture, which was taken at the Auckland Lantern Festival last night. Notice anything interesting? (Besides the spelling of Mongolia) My wife was quite amused by it, while we were waiting in the long queue for the lamb kebabs, because it's another example of a phenomenon that she'd often seen in New Zealand and a contrast to what you'd see in China. In China, you'd often see signs like this but only when there is a discount for buying more. $2.5/p = $10/4p is simple maths, so it makes you think of numerous possibilities: (1) their maths is bad and they don't realise that it is not a discount; (2) they think your maths is bad and you won't realise that $10/4p and buy more for no discount; (3) they think you're bad at maths and would like to help you to figure out how to get the appropriate serving of 4 pieces, i.e. skewers. None of these possibilities work in China, perhaps because people are generally sharp with maths (apparently) or people would laugh at it, just like my wife.
I was trying to think of a reason for people doing this, apart from filling up the sign or the reasoning above. Anyone got a solution?

I've got a couple of possible rationales mostly revolving around the idea that they can change the price (which may or may not be possible). Firstly, it's interesting to think of the situation of a stall in a big event like this. They prepare lots of supplies based on an estimate of how much they think they can sell. There is a limited of space to store meat and prepare it. Also price signs like the above can be changed and adapt for changes in the market prices. The key for a successful food stall is to sell them all that you have estimated for the highest price. The first goal is to get people into kebabs and ideally forming a queue, so a low price at least at the beginning is good. Then you need to make sure you set a trajectory to sell all your lamb, and that would be best to have a discount for more. So either raising the one-piece price or setting up a discount for a bulk quantity would be smart. But what happens if you are selling too many, especially at the bulk price? Well, you can either raise the price of both, or you can just make the bulk price no longer discounted. Possible? Probably not, but that's all I got.

Posted by Crypticity at 5:10 pm No comments:

There's been a lot of talk about how Facebook's algorithms and slanted or vapid media has given us our own information echo-chambers. Watching cats begets more cat news. Liking right-wing links begets Fox news. At least on Facebook there are people who have a free pass past the wall, and they are our family and friends.

"I know you don't agree with me," someone mentioned to me. "I saw what you wrote on Facebook." Now, I knew that I had views polar opposite to him and he had mentioned this several times in the past; but, this was the first time that he'd raised Facebook as the source of his inkling.  I asked about the particular items but the specifics were a bit vague. He could remember me mentioning something or liking something that was against Israel making settlements in certain areas. It was probably in response to the backlash from NZ sponsoring a UN resolution against Israeli settlements in certain places.

The funny thing is that I never really imagined that he cared about Israel, but that was a bit naive. He's got clear views about muslims and your enemy's enemy must be your friend. He adores Trump and said that I must love Hillary or something to that effect. I said that I'd said some positive things about Trump on Facebook and even read it aloud to him:

"I think tuning out for a while is a pretty wise idea for all concerned. Re: optimism and the US election, I think there are reasons to look forward to the next few years. This is someone who will shake up the US's meagre quotient of parties and even the system itself. The US system is bizarrely corrupt and even an out-of-the-mould character like Obama left it just as it was. If this apparent American idiot can trigger change, either by himself or the response to him, it can only be good. Let's just hope he doesn't put his little fingers on the wrong button in the meantime." - Me, 11 November 2016.

I read it out but every time I got to "apparent American idiot" he stopped me. I clarified the meaning of "apparent" but he still wouldn't let me get to the end. I eventually just said "apparent American" and it slid. Leaving out other aspects of the discussion, it is interesting what things get through and what things don't.

As for my original sentiment on 11 November, I still stand by it, especially what Trump may trigger. I just wished that it was easier to tune it out in the meantime.
Posted by Crypticity at 7:01 pm No comments: