Words and letters (2): You say tomato; I say tomato. 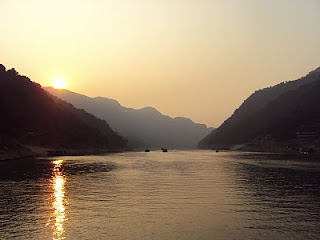 I usually spend my days switching roles between a self-studying student, to a teacher, and then occasionally a student with a teacher. One interesting recent experience has been a new role: language researcher. Just up the road (75 minutes by bus) over to the neighboring city of Qingyuan is a realm slightly removed from from my Guangzhou Cantonese world, a world of distorted sounds and fascinating words. Qingyuan dialect is a close relative of Guangzhou Cantonese and for me, an elementary learner of Cantonese, the twists and turns of it were enough to leave me dizzy when I first heard it in September last year. I've just come back from my second time in Qingyuan and this time it was for nine days. Every day was a step deeper into a language for which there was no reference but the speakers themselves. Every day there were little discoveries which speak a lot about languages in general and that is what I feel most moved to write about.
The language is always strongest in the older generation. Generalising and innovation might come from the youth but their parents and grandparents have the most authentic and unique speech. This also makes the learner's job a challenge. I can remember when my students in New Zealand used to complain about them not understanding their elderly host parents. The shoe was firmly on the other foot when the rapid speaking extended family in Qingyuan spoke to me. What little language I had got me through in a basic way but some people were completely beyond me. But they are the storehouse of a language. As soon as I realised some of the rules they were the easiest to spot them again and again. The elderly present another problem which fortunately for a language learner is a blessing. Accuracy is a requirement - they don't understand you either unless you use the correct tone and pronunciation. Children and younger people can guess your meaning even if you say pronounce something crudely. The older the person the more feedback you get to improve your speech.
A conversation after three days on my second visit:
"Why does he always start his sentence with that word 'gui'?"
"That means 'he'"
I was gobsmacked. I had had conversations with them on the preceding days but hadn't noticed that I was missing one very fundamental word. What's more I only found out on the second to last day that the same word can be used as a determiner "that". This I hope illuminates how much one does feel around in the dark. (Or how blunt my brain is.) It is deciphering and matching patterns. You can't even ask a native speaker to tell you the differences between their own dialect and another (in this case Guangzhou cantonese). You own language is not strange to you and you don't spend your days thinking of these things. As for "gui" (he), I probably misunderstood a lot of sentences about myself!
"What is syu-gee?"
"See-gei (Guangzhou Cantonese for "driver"). But that might only be in our three villages."
Three villages? Well, actually I've found out it is more than that but the shocking point remains that a whole variant of language can exist in a fairly small number of people. It is only because most English speakers live in colonies that have a generalised English (with accents but without dialects) that we don't notice this. Countries where the languages originate have the widest varieties of the language. England itself is a case in point with a lot of regional variance. And conversely New Zealand, too, proves the opposite. We have an indigenous English with our own vowels, our own phrases and idioms and grammar unique to our area, in a population of only four million that has been around as an English dominated state for 171 years.
See-gei in one place and syu-gee in another place just a stone's throw away seems astonishing. This is an element of language known as a vowel shift. Many sounds in Guangzhou pronounced "see" are pronounced in Qingyuan as "syu"; many sounds with -ei endings here are pronounced as "ee" here. English went through its own series of vowel shifts that are shown by the words that are spelt as if they should rhyme, but don't; or that aren't spelt like they should rhyme but do (e.g. love and grove; meat and meet). Grasping different vowel shifts was crucial to understanding and being understood. There is also a massive vowel merger in Qingyuan dialect too where three different sounds in Guangzhou cantonese are now just one in Qingyuan dialect. In New Zealand English we may have a merger underway. Many young people will have some trouble grouping the following sets of words into rhyming groups: here, hair, hare, hear, peer (n), pear, pare, peer (v), dare, deer, dear.
There are plenty of unique words and usages which escape any "rule" too. Language is not physics and language will always form its own idiom, which brings us back to that fruity vegetable, the humble tomato. There is something about its fleshy delicious texture that makes people want to name it in different ways. Taiwan mandarin says something completely different to PRC mandarin (xihongshi and fanqie respectively). And now while discussing cooking I find that Qingyuan has its own way of naming it, different to Guangzhou just down the motorway. Sometimes the lack of a rule is a rule itself.
The trip, if taken solely as a language investigation, was a great success. I can talk to both adults and children in two variants of Cantonese about simple topics. Cantonese is still just a push bike to the race-car of Mandarin (or the bullet train of English). But I have a bike. I can ride. And there are some interesting places I can go with it.
Posted by Crypticity at 2:43 pm No comments: