Next Sunday the gun will go off and all the others gathered at 5:30am on Takapuna Beach will head off with me for a couple of loops of the peninsula, including two ascents of Northhead to complete a marathon. Actually there's no gun. Most races have a countdown. I've been to a few that precede that with the national anthem in Maori. I like to have a bit of ritual about the starts both in terms of my own routine and what the race organisers cook up.

5:30am is the earliest I'd have ever started a race but thankfully most of my training is earlier than that in the morning so I don't think it'd be a problem. Race organisers probably had to have us go earlier because of the tides. (Each loop has two beach sections.) A 5:30am start though means having breakfast by 3am, which means the whole night before becomes a little bit of a joke. I think I'll need a nice simple week before this so that I generally rest well.

With 10 days to go, the extended forecast now extends to event day. Rain, it appears, but is bound to change as we get closer. I've never run an event on a rainy day. I hope I don't need to at 5:30am in the morning wait for the start in the rain.

The lead-in has not been without set-backs. After my half marathon two weeks ago I was in Fiji for a week which was well timed as it was the first week of my taper. However one of my arches flared up for a couple of days, and then when we landed back in Auckland I had a 24-hour stomach bug which meant I was too sick to run on the day I was planning my last long run. I had two consecutive days off running for the first time since May when I fell in the Domain. I've gotten back to it but I can't afford to do anything two outlandish. Probably this won't affect my performance but it just means I won't go in with the same level of confidence.

Before the half marathon I struggled to imagine that I would be able to pull it off with my eventual pace. My expected marathon pace is exactly the same. I can't really believe it but with the training and the chance to taper it should be achievable. The taper is said to a be a time of nerves and uncertainty and I completely feel it in terms of the confidence that my training and my body can cross the line in the way it is projected to. Only time will tell.
Posted by Crypticity at 7:33 am No comments:

The one before the next 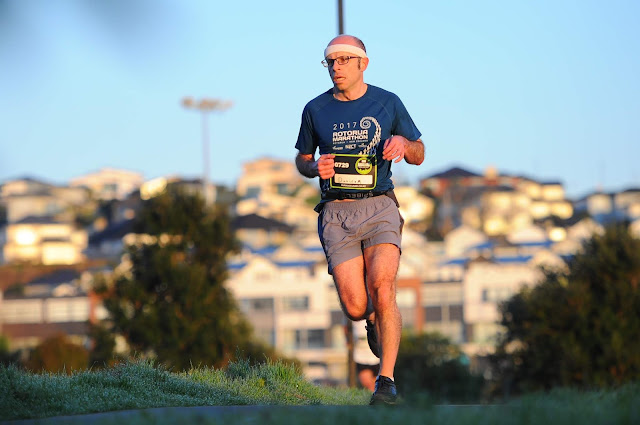 In my lead-in to the North Shore, there were two well-placed "moments of truth" that would evaluate how my training was going. The first was the Western Springs 10km, for which I was aiming to run 42:00. I ran 40:50 and knew I was on the right track. This morning was the second of those, the Millwater Half Marathon, the climax of the Run Auckland series. Based on Western Spring's effort, I should have been capable of a 1:31:00 half marathon on a flat course. This is a scarcely imaginable time based on my previous experiences. All my previous halves have been in the 1:35-1:55 range. Millwater is not a flat track. It has hills, corners and undulation. It ambushed me last year where I had the fitness of 1:36-37 but paced it rather unwisely and struggled to a 1:40 finish.

I "conservatively" set myself a goal of 1:32 with hopes of doing better. In the end I got myself 1:31:10. It all happened all rather smoothly. It started with an outstanding day. Probably the most Spring-like day you could imagine in winter. I warmed up a little hastily but felt prepared, and then we were off. Again I tried to size up who to pace with but the pace readings I was getting sounded too fast and I slowly dropped myself back from any potential targets. Eventually I was passed by "AH".

AH was a familiar face for me in many ways. He is in his 50s but a very strong, metronomic runner. I always remember him in the leading bunch in the previous year. He probably didn't know me from a bar of soap before today, although he might have recalled me from the Western Springs event. I'd followed him for half that race before burning him off in search of a faster companion. When he caught me, I parked myself a metre to the rear of him and bided my time. Eventually I took a few turns leading him until about the 15km mark where I made my move. I chose to go full-tilt down the one sharp slope on the loop course and bolted away from him and shot past another runner. My next target was "The Last of The Night Ninjas". The Night Ninjas seemed to be a training team. Almost all of them were in the top 20! Fortunately, there was one just a little bit slower than the others who had always been on the horizon in their orange kit. The orange was a key point because on the second lap there was a lot of other running traffic with the track being shared with the half marathon walkers and 10km runners. It could have been difficult to pick who was actually running in my event, but with The Last of the Night Ninjas ahead I had someone of relatively equal pace to reel in. It took about 3km before at about 18km we and one other formed a bunch for about a kilometre. That was when I attacked the last hill and left them behind. Once over the hill and just over a kilometre to go, I felt I still had plenty left in the tank and went into overdrive, passing more or less at will to the finish line and recording 1:31:10. It was a personal best by 5 minutes to my previous best official time.

The only blemish was possibly from my over-eagerness the day before. There was an Asics training event with a group run. I'd initially planned to run easy and put in some bursts of race pace. Usually I wouldn't run more than 5km the day before but with the group I decided to do 10km, mainly because my mileage for this week was going to be below 100km and I wanted to make up for the lack. Then I went with the faster group. I felt like I was running well but when I got home I noticed some tenderness in my shin. I treated it as well as I could but could still feel it in the morning before my run. In the initial kilometres I could feel it too. It didn't stop me running as I had wished. In fact it was the same problem I felt back in April/May this year. The same problem that I had in the Rotorua event. I'd ignored it then and I ignored it today. After that run I was a cripple. After this run I felt like a cripple. This evening the swelling and pain seem to have subsided somewhat and I hope that again it's just a temporary thing that won't hinder our trip to Fiji and any training I want to do there.

With it shattering the 1:35 wall, I look forward to the Mizuno Half Marathon Series, which begins in September. The next wall is the 1:30 threshold. With my current fitness on a flat-track, I would expect myself to be able to do it, and there are some flat tracks in the series. Couple that with further increases in speed and aerobic base, I look forward to it.

Three weeks to go to North Shore. Some lacklustre long runs had shaken my confidence; while some big events show I'm still pretty fit and able to take what the courses throw at me. I think this Moment of Truth is truest.
Posted by Crypticity at 6:54 pm No comments: