I'm not the kind to worry much. I'm reasonably carefree. But I do have a fear that something is eating away at my powers of thinking; that my mind itself is losing its edge, and doing so much faster than it would be expected via ageing alone. This might be a kind of mental hypochondria but such conditions do exist and with dementia in the family it makes good sense to be self-aware. The evidence? Well, a fear needs scant evidence to feed it, especially late at night, but I feel my bogeyman makes a good case even in the light of day.
Exhibit one is the communication problems I never thought I had before. It seems I struggle a lot more now to formulate an idea, even a simple one, in a clear way. As a manager, it is something I have to do on a regular basis to my superiors, to my team and to my peers managing other centres. The general pattern: I open my mouth instinctively starting from somewhere midway into the topic, reversing back to where I should have started, losing control and inadvertently getting my references backwards (like calling Bob Julie, and Julie Bob). I start to panic a little when my listener frowns to indicate the effort at which they are expending in order to follow me; this in turn sends me into a panic of mixed metaphors and the incorrect use of key vocabulary; and then sometimes I seem to stutter in a way I cannot recall. I relate a little to George Bush, I guess.
As a teacher, my powers of expression are my livelihood, too, and oddly at first they seemed unaffected by this "decline". I always understood this as because in classes I could focus for short periods of communication, while communication in life is not so easily segmented and is never ending and often pops up on you unexpectedly. But now I'm finding the pattern recurring in my teaching, where students might not follow me on a more a frequent basis.
This problem affects all three of my languages. Sometimes I think that perhaps my surplus of language might be the cause of the problem, that my brain is overwhelmed with holding together three separate languages (big hefty things, they are). But that is not very scientific and I've never heard of that before, except in the unfounded fear of parents who think their children will get confused if raised in a multilingual environment.

So instead I occasionally fret or worry and my managers and colleagues frown. Is this going to get worse?

Posted by Crypticity at 6:33 pm No comments:

To teach is to learn. And to be a good teacher you must learn to be a good learner. And that's what again was the rod that struck me again today in my life as an English teacher in China. In fact the lesson could only really happen today when I had several instances of connected speech arise in my work and then the same phenomenon knocked me around a little in my casual study of the Cantonese dialect.
What is connected speech? It's the natural changes that occur to pronunciation of words when in a natural speech. You see, every word has a proper way of saying the word individually, for example "can". When you say it by itself it has a sharp vowel. But put it in a sentence and it degrades: "Can I help you?" for most speakers becomes "k'nai HELL pyoo". The once proud "can" no longer being the centre of attention breaks down to mere consonants. "Can" is most often pronounced in its weak form. Of course, in that rather mundane example there are even more  of connected speech. There is also concatenation which is simply when the sound from the end of one word is pronounced with the sounds of the next. In the example, "nai" and "pyoo" are more attached to the following word than the word we attach it to. In a wander in the computer lab a student asked me about another phemonenon, intrusion. She got me to say "You and me" naturally. Try it. To the untrained ear, you might think you are just saying those three words, but closer inspection leads you to notice that you're in fact saying: "YOO wum MEE". The "w" is an intruding sound. Incidentally this example also has elision with the "d" being hacked off "and" and another effect compounding it, assimilation, where the stump "n" in "and" is influenced by the "me" and becomes an "M". As a result, by the end of the spontaneous transformations, a student will wonder how such an easy word like "and" which they say correctly by itself, could mutate into "wum". Fortunately my student was quite accepting of the interloping "w" and just wanted me to say it naturally.

As a teacher, it took me a long time to realise that though we teach connected speech as something students can say, the first step in learning it is awareness. You need to notice it, or be told it exists and then notice it before you can learn it.Then you can notice the common patterns so when you hear an utterance that somehow has become unintelligible, you have a few cues to help decode it. Even if students can't say it, and believe me they struggle to unlearn the "proper" forms of words when they speak, they do need to be able to listen and recognise it.

But there I was yabbering about something I k'n confidently deal with, my forte, English. When you're the teacher and master of your language you can smugly say how it is with a smile and if there is resistance, you k'n just say that that is what English is and that it has to be accepted. But after I knock off work, I remove my English right shoe and put on my Cantonese left shoe and suddenly begin yabbering in a less consistent, less assured way. In earlier blogs, I've mentioned that Qingyuan Cantonese has routine connected speech with particular words. I'd adjusted to this because they were particular high frequency words. They were set contractions just like English has "won't" "aren't/ain't" "can't" etc.

I knew that there were some mild features in Guangzhou Cantonese too, but not to the same creation of set contractions. Now, watching a HK crime drama I've scratched deeper by noticing the more garden variety connected speech which is more subtle, quick and insidious. And so the left foot has started kicking. The contractions I've only just gaining an ear for a quick. The Cantonese word for but is "daan6 hai6" (numbers denote tone) only now have I realised in the TV shows that it's mostly said as "Daa'ai6" unless said deliberately. Another 3-4 changes I noticed in about 20 minutes of watching all because my mind was switched on to inconsistencies and unintelligible sequences that the mandarin subtitles hinted as being intelligible phrases.

There are inherent difficulties in understanding connected speech: the phenomenon happens more with faster speech. That means that fast speech is not just more difficult because of the pace but comprehension is also obscured by these transformations of sound. And couple that with the tendencies of speakers to go from fast to slower in a turn at speaking (often this happens in language where the key information is later in the sentence so the first part which frames it is hastily rushed through). That means for a learner watching a TV series, when another person starts speaking they'll throw high speed sentence starters before saying their key information. That helps for understanding gist if you ignore the first few words they say, but often the initial burst hits me like a drawer of flying knives, causing me to duck the rush of meaning that quickly ceases by the time I get the composure to listen onward.

Learning language you don't just need patience but a degree of foolhardiness to stand strong in the rush of meaning and take it in.
Posted by Crypticity at 6:18 pm No comments: 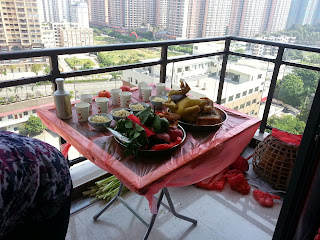 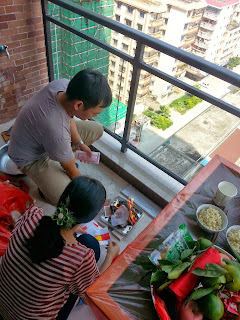 "Burn the golden money first" my mother-in-law instructed, as my sister-in-law, Hiuming, and her fiance, Winston, set up the mini-furnace near the mahjong table-cum-sacrificial altar that they'd placed on the balcony of their new home. It was their house-warming, but one that entailed far more customs than you'd usually associate with a western housewarming party with beer and pizza. They had money to burn, literally. Fortunately the money was fake.
When I arrived they were just arranging the table on the balcony: two apples, three cups of tea, four bowls of noodles and five cups of rice wine, and of course a chicken. This was in accordance with Maoming tradition (which my Qingyuan in-laws had a lot of trouble adapting to). These foods were for the ancestors, the chopsticks were oriented for floating visitors, and so was the "money" that was about to be burnt. The mini-furnace wasn't really designed for the winds that were on the 14th floor. And as would be expected, shortly after flaming ashes blew through the living room in mini-whirlwinds, igniting and extinguishing their way past the coffee table, where tea happened to be being served. I scrambled to the kitchen to grab a broom. "You can't use brooms!" I was instructed by the cooks. Apparently you can't clean the house at all until the first three days are up. It's bad luck. So we stamped the flames and collected a few ashes with tissues instead.
Even for a seasoned China expat like myself the proceedings still had a lot to notice and learn. Maoming tradition is quite strict. The family of the people moving in have to leave the lights on for three days, and all meals in those three days must be spent at the house. There were the little things, too: Mattresses were all raised on the first day; All new furniture had red paper stuck to them; and lanterns were placed in every room alight; even the time when you can first enter the house is regulated, and you need to wait for a particular time to enter.
After talking to my other half, I realise that I just haven't seen the Qingyuan ritual yet. The ritual for the family home was apparently even more elaborate and, being in the countryside rather than the city, had all the bells and whistles. This part of life, though, is dying. Very few people under the age of forty would do them without the insistence of the elders in the family. I remember back to my first Chinese New Year at my former student's place and I was astonished that they would put a furnace in the stairwell of an apartment building (but it's commonsense in China).
Posted by Crypticity at 2:37 am No comments: